Crossed at the ankle

Totally impossible to describe all the cute Louisisms happening here everyday now. So I'll just post about one... 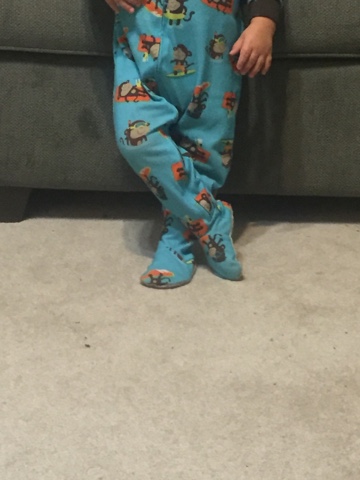 These feet are crossed after every ball retrieval and before every throw. He does it carefully and deliberately. And it's the cutest, most precious little habit. Then he throws, giggles, and loves to see me fetch. Every few tosses he'll want me to switch sides with him which he tells me by crossing to me and lightly pushing me on the back while saying "back Mama, back!" Woe is the Mama who tries to refuse the Louie! He was delighted earlier tonight bycatching the ball several times while big brother Samuel tossed it to him. He was very proud, and so was Sam. Sam called to me to make sure I saw.
Meanwhile Sabrina and I worked on times tables. She has a song she made up for the 12s. We quizzed for a good while, and she's really doing well. I love sharing tricks and logic with her. I think she's really coming into her own in math.
Earlier it was Samuel's turn to shine at the 1 to 3 addition tables. He can do most all of it in his head, but also worked out a shortcut using the flash card sheet I haven't cut apart yet. I thought that was pretty clever!
These kids challenge me more than any part of my life but bring me more joy than I could ever deserve! I'm so thankful for them and their good hearted father. 💕
Posted by Sarah at 11/02/2016 No comments:

Louie can say Bible Study. He can sing twinkle twinkle, itsy bitsy spider, ba ba black sheep and all of his Mommy invented Louie songs.
Samuel was telling me all about the rules of kindergarten and illustrating what you could and could not do. He's only had to move his name twice he says, and never lost recess time.
Posted by Sarah at 10/05/2016 No comments:

For her birthday we celebrated a week early. Hailey, Emma, Kylie, Summer, and Jordyn were her guests. We went to Wonder world in San Marcos where we petted and fed tame deer off of a train and took a cave tour of the cavern on the Balcones Fault line. Then we headed home for pizza, presents, movie time and cake. The girls had so much fun! Zachary also came and kept Samuel busy and happy. 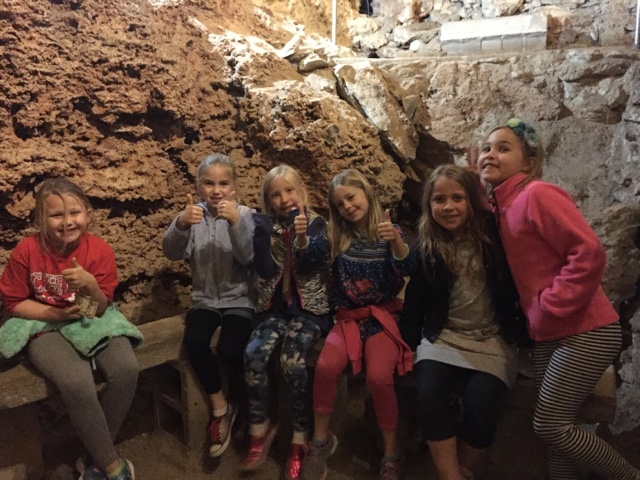 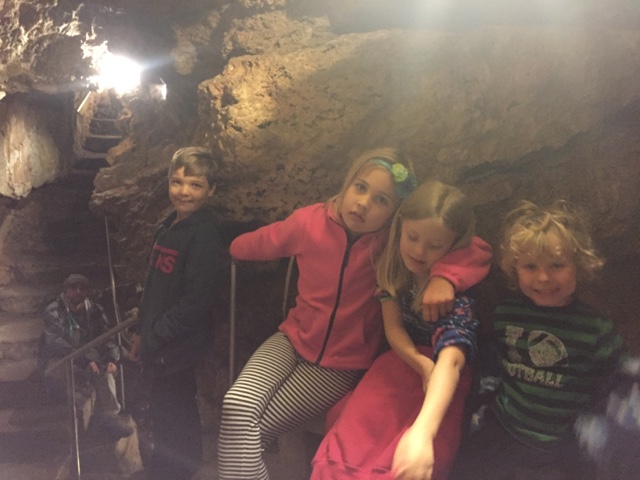 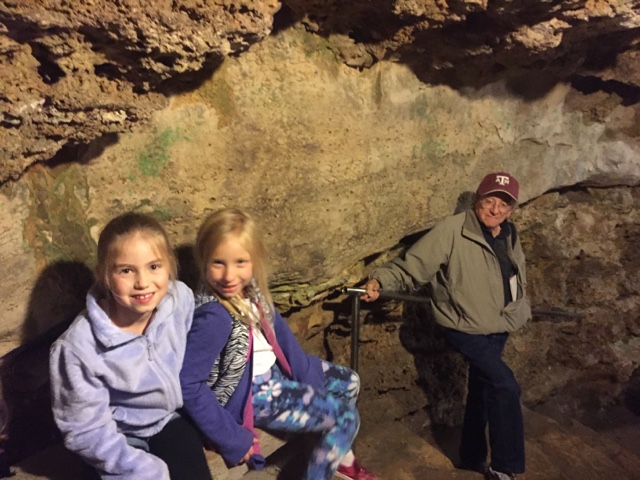 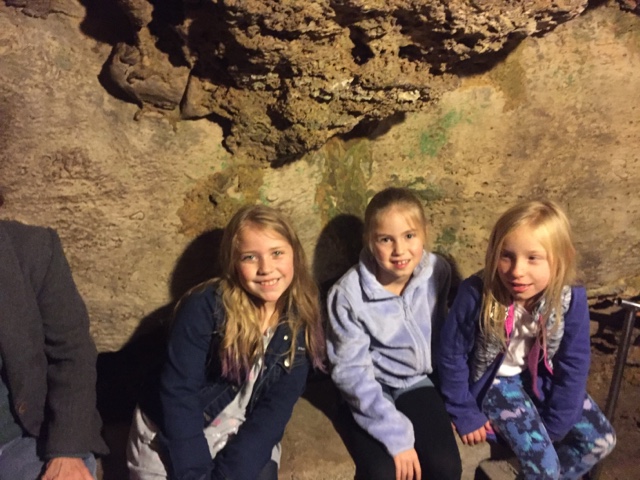 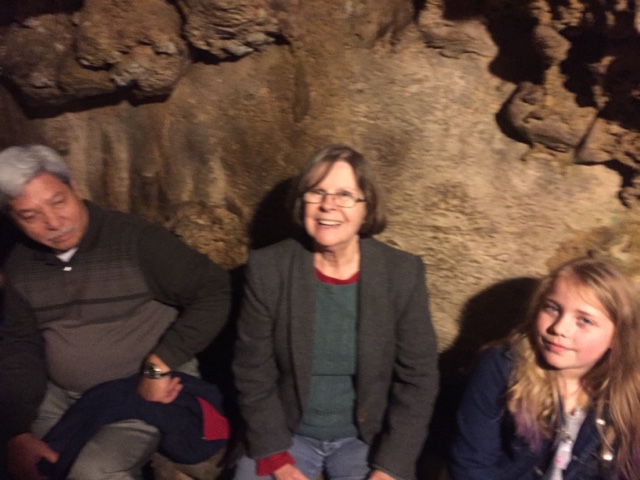 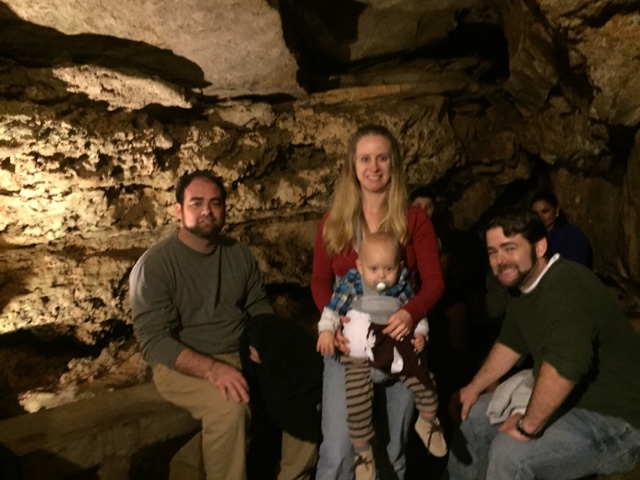 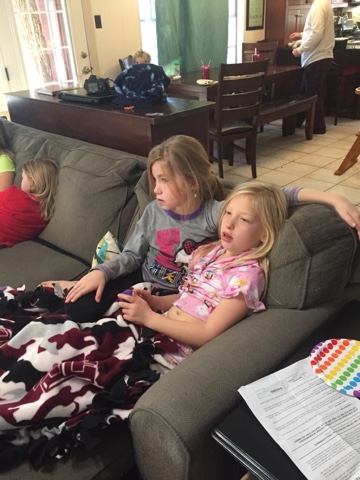 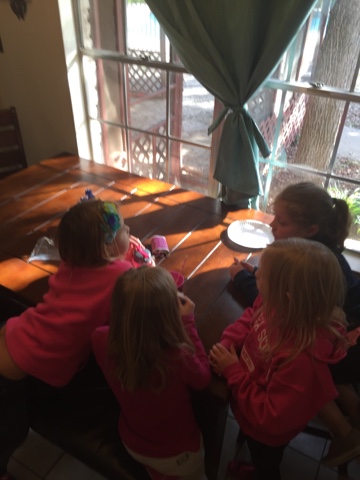 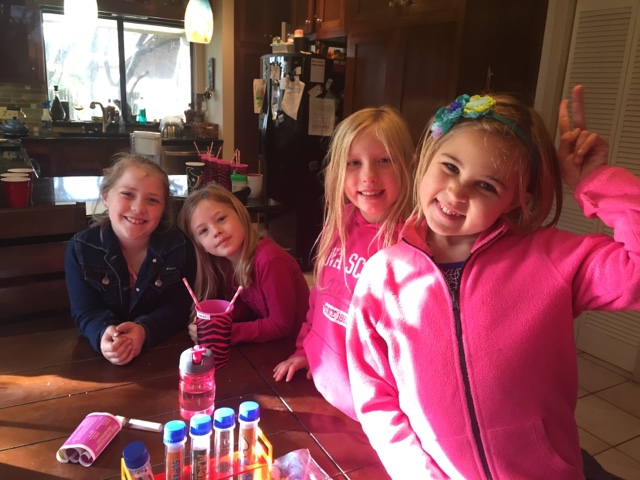 Last weekend we gathered together for lunch with the aunties and uncles on her real birthday. It was delicious and such a beautiful day! 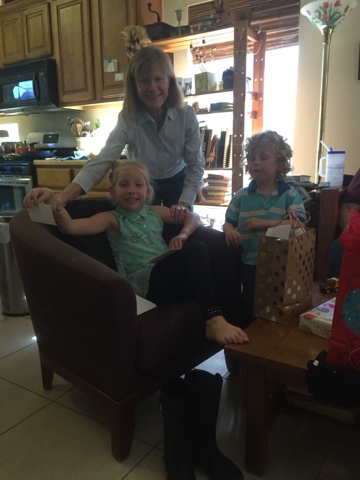 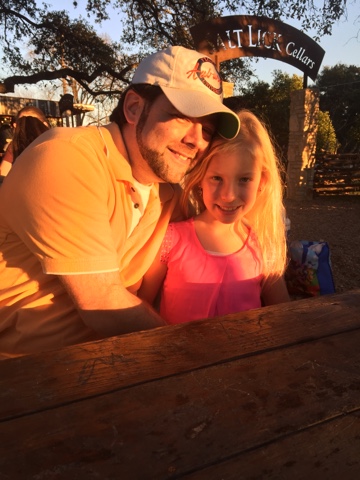 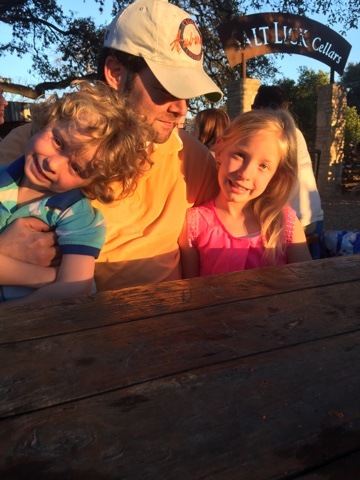 We wrapped up the day at Salt Lick with Hanna, Jeff, Warren, and Connor. Yum Yum and play time after at the park! It was quite the time. 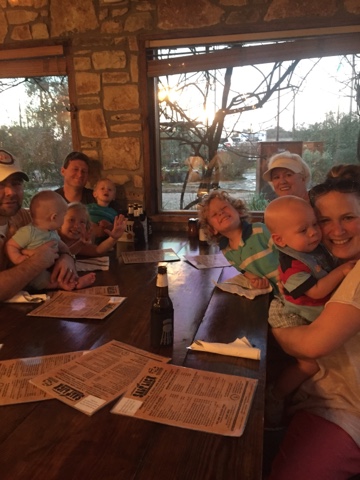 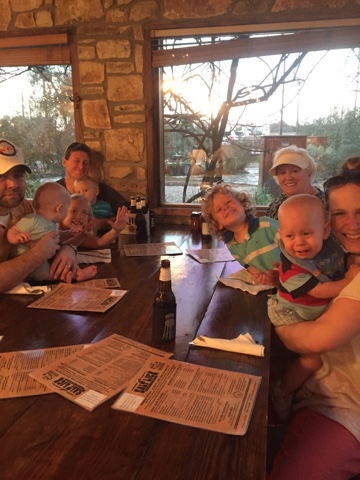 These sweet moments are the highlights of my life!
Posted by Sarah at 2/03/2016 No comments:

Found myself with an unexpected work project last minute but got to bring the family for the first night and a little touring of the Alamo city. They had such a blast! 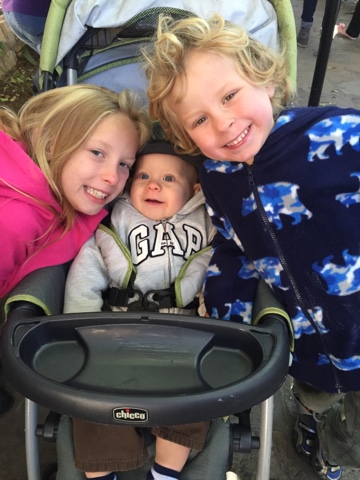 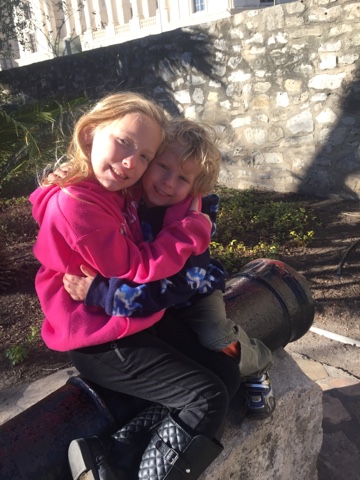 Philip and I were captured pretty well too!
(Photo credit to Princess Sabrina) 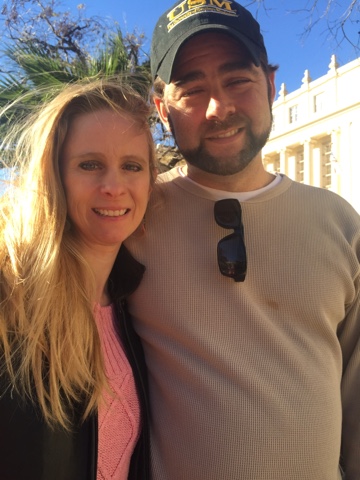 We spent time learning and touring the Alamo, watching the video presentation and visiting the museum. The kids were super interested in the triangle pointed bayonet.
Then we saw the half dozen pianos and historic Menger (super cool), and began a very long meandering walk back to the hotel where we started. A couple of nice meals out, a spacious suite room, and lots of exploring time with the kids? Excellent!!!
Highly recommend the Riverwalk in winter! None of the crowds and so much beauty!
Posted by Sarah at 1/11/2016 No comments:

Samuel learned to ride a bike with pedals in about 20 minutes yesterday! He was intensely proud of himself as were the rest of us. We all credit his balance bike for making the transition so smooth and quick. With his balance already established, it was super simple for him to learn to pedal without training wheels! SO so awesome.
Louie has been signing fan, milk, and all done, but just yesterday with some practice (and yogurt he really wanted) he picked up the sign for more! It was really quick, which was very cool. He is a dancing fool too- loves to rock out while sitting and standing!
Sabrina is really enjoying the chemistry and art sets she received for Christmas. My heart is full when I watch her conducting the experiments and learning cool facts about sugar versus salt! She finished Charlotte's Web yesterday. Philip bought her the movie so that is up next as a promise from him.
Posted by Sarah at 12/27/2015 No comments:

Louie and his new (old) toy

Sabrina got this walker, that turns into a car, for Christmas- her very first Christmas. Now Louie is using it as Sam did before him. Toy on it's third round over eight years? That's a pretty good toy. I forgot when milestone mentioned in yesterday's post – Louie is also starting to dance. He has the typical Johnson moves and it's adorable.
Posted by Sarah at 11/26/2015 No comments:

This week was a big one for Louie- he turns one on Monday, Thursday is Thanksgiving, and he started taking his first steps.  He also very cutely has began to say 'mama'!
Last weekend we had his first camping trip. We went to McKinney Falls. It was cold, but we had a cabin in a space heater. We all came back smelling like campfire. It was great! 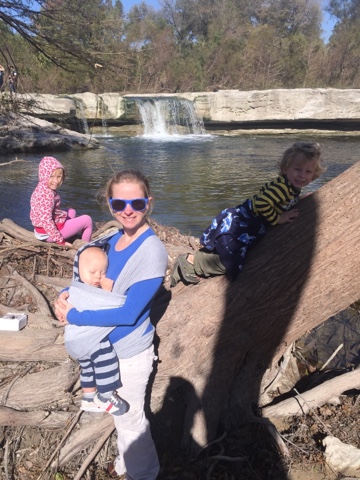 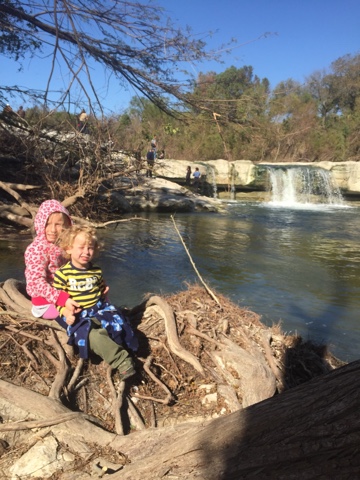 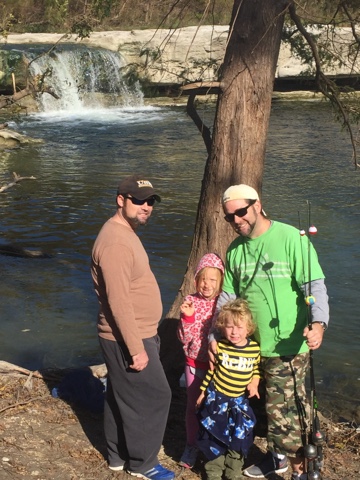 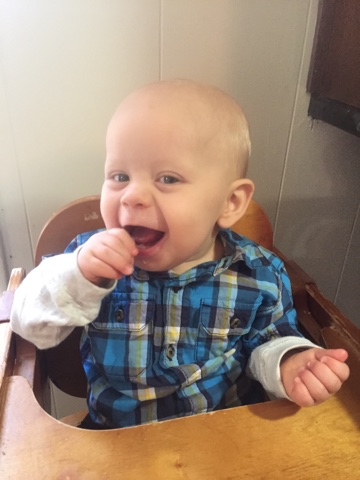